in 2011, I had developed a Brain Computer Interface (BCI) based system to allow persons with severe disability to type on computer and do other things such as control light fan etc. This could help those who do not have hand/leg movements. A device of this kind was provided to Mr Suresh Karat in Coimbatore in March 2012. I came across video of talented Sarita Dwivedi and thought she may benefit from this device. Sarita lost both her hand and one leg in a childhood accident.

She overcame all the barriers and is an excellent Painter, Sculptor and so many things in addition to being a great human being and a kind soul! I tried to contact her and finally got through to her after a week and talked to her on phone. She was not very enthused about my offer of BCI device as she was worried both about its cost and utility. I said do not worry about cost as it would be a gift. She said she would like to see how it works as she is not able to understand. I agreed with that and asked her if she needs anything else that I could help her with. She said she can do everything except three things. Then she talked about need for a computer/laptop for her BFA course. I said that is easy and she would get it, since it is only a question of buying one from market.Then I asked her if she needs something that she thinks may not be possible but is her dream!  I told her to tell me even if no one in the world is using such a thing. She then got little serious and after some time said if she can drive a wheel chair. I said it would be possible. She asked how is it possible since she does not have hands to operate a joy stick. (After 3 years she told me that she was playing a joke on me and thought it would not be possible and I would not bother her more!)I told her that I would either use her head movement, voice or her leg movement to operate the wheel chair. She probably felt enthused but very uncertain about such possibility. At that time I tried to send a message to Mr Bhargav(Callidai Motorworks) on FB although we had never chatted on FB before. As luck would have it, he was also trying to message me at the same time for some other work (what a coincidence!). I told him about the need of an electric wheel chair for Sarita and showed him her video. I asked if she can operate joystick with feet. He said it would be possible. I then asked him to go ahead with it and transferred money to him for the purpose. Subsequently I made a request to on FB to others to contribute to fulfill Sarita’s needs. Within 10 minutes well wishers came forward with the needed money. One friend (not sure if he would like to be named or not) sent a laptop to Sarita in Allahabad. I went to meet Sarita in Allahabad towards the end of May 2012 but wheel 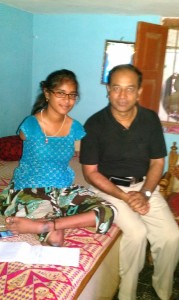 chair got bit delayed and at that time could not see her use it. I was amazed with her capability and skills. She did not need any BCI to use computer, mobile phone or anything else.She could do all of this with great dexterity.  I spent some time with her and then returned. After few weeks, wheel chair arrived at Allahabad Jn by train. Sarita’s brother went to get it released. When he was carrying it out, police people tried to harass him. I tried to talk to them but they would not talk. But after some time when they realized that it was wheel chair, they let him go. Wheel chair was to be assembled b

y a technical staff of company, who would have come few days later from Delhi. But Sarita could not wait and on that day itself (Sunday) she got her brother to assemble it and started to use it and went to temple. She did face few problems due to bad road but over last 3 years she has been able to not only manage to keep it running but also use her intelligence to improve. It has helped that she has been working with ALIMCO, which manufactures wheelchairs along with other assistive devices. Recently I visited her at her office as seen in picture. 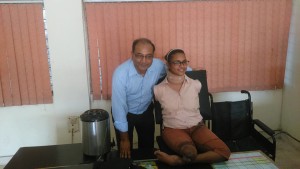 W hat an amazing feat of mental strength and endurance.
Very courageous girl.
I bow to her determination and God bless her.

Very inspiring for all.Thanks to Prof. Ranjan for your untiring effort .