This is story of Charu Khandal, Lead Animator of Shahrukh Khan’s movie Ra-One, who met with a terrible accident. I tried to help her through assistive technology and as she was about to get back to Bollywood, we lost her! 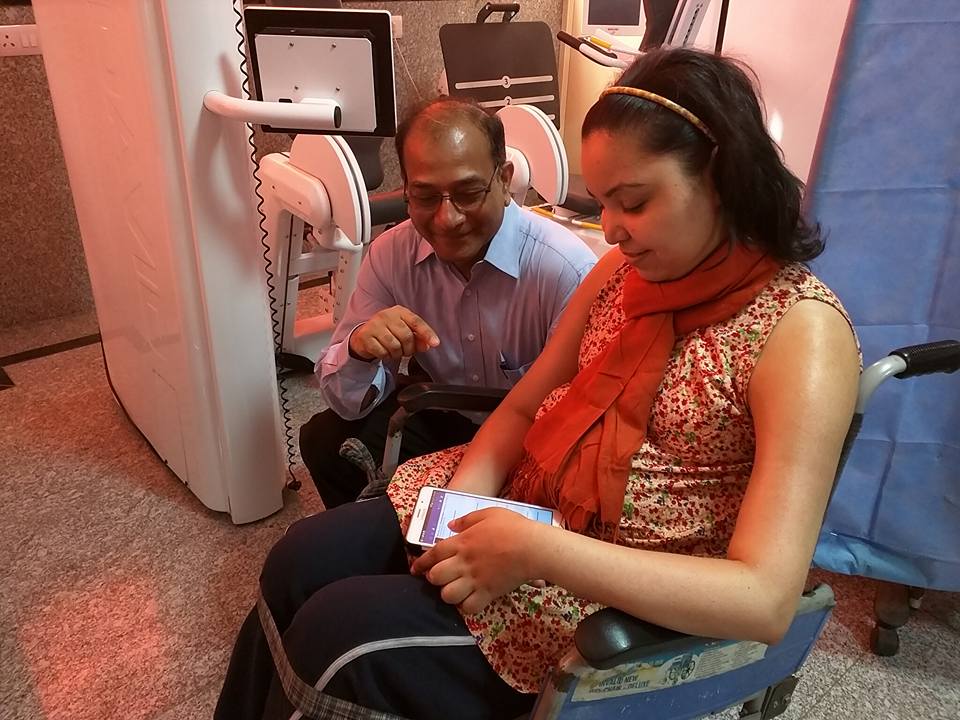 Facebook memory showed up a post of mine from Jan 17, 2017 where I had shared a sad news about shocking demise of Charu Khandal – Ra-One movie animator. I felt compelled to narrate her story as I know it.

I had been working on assistive technologies to help persons with severe disabilities since 2007. Slowly these devices started to become useful and around 2009, we started to try these out with needy persons. Our devices used body part movements such as hand/leg/head movements to operate devices such as light, fan. AC, Computer etc improve functionalities and self dependence of Persons with Disabilities(PwD). I would write a separate blog on this work so that I can focus on Charu in this blog. As part of my growing involvement in assistive technologies, In 2011 I developed Brain Computer Interface (BCI) based system to help persons who do not have hand/leg movements etc such as those in “Locked In” condition and other similar situations like MND etc. On July 1, 2011, I demonstrated to my students and project engineers using my eye blink/smile etc to control equipment such as light bulb etc. This was done using a neuroheadset from Emotiv and a interface box developed by us.

After having developed this technology, I started searching for persons to help with the technology. First person, I could help was Mr K Suresh (Kesu). Here is the story from the man himself : https://www.kesuresh.com/2012/04/i-can-type.html. This happened in March 2012. It got covered in new media as well.

I was in touch with Dr Abhishek Srivastava , Head, PMR Div, Kokilaben Hospital, Mumbai and had visited him to apprise of our work. I shared with him information about BCI work and also news paper clippings etc. He informed me that he is not able to understand the nature of work and it would be better if I gave a talk at his hospital during my next visit to Mumbai. I was visiting Mumbai on June 8-9, 2012 to review a work that was being done at National Lab, SAMEER (IIT Bombay campus) as part of my Chandrayaan-II project. I took this opportunity to visit Kokilaben Hospital and give talk. As medical professionals have very tight schedule, talk was organized at lunch time and about 40 persons attended my talk. Once the talk got over, Dr Srivastava and others present understood the nature of work.

Dr Srivastava told me that he would take me first to a celebrity patient. He did not inform me about the patient but later on I came to know that she was Charu Khandal, an animator who was responsible for animation of “Ra-One” movie made by Shahrukh Khan. She had won a national award and the day after that on March 24, 2012, she met with a severe accident in an auto that she was traveling at midnight. Here is the story from one of the news reports:
https://mumbaimirror.indiatimes.com/mumbai/other/had-i-been-with-her-this-wouldnt-have-happened/articleshow/16217385.cms

Due to accident, she went into Coma and was admitted to Kokilaben Hospital. After few days she came out of Coma but she was paralyzed neck down due to spinal chord injury. However she had regained her voice. It was in this condition that Dr Srivastava took me to her. She was undergoing physiotherapy at that time. Dr Srivastava asked her what do you miss maximum? She immediately replied – “Computer”. Then Dr Srivastava introduced me as Scientist and said he would get you to use computer. As an animator, her life was tied to computer and revolved around it.

After physiotherapy session was over, she moved to her room in the hospital. Then I along with couple of hospital staff went to meet her. At that time her mother and two sisters were present. Her fiance, Sagar, was also present. I set up the system and explained to her about how she would use it. She started and within 2 minutes she started typing on the computer. She wrote – “hii this is an amazing software. My name is Charu Khandal.”

After successfully typing, she asked me if she could play games. Unfortunately I did not have any games on my computer. So she wanted to try her hands on painting. I explained to her how she can use the device for that purpose. She immediately tried her hands on doing some strokes as shown in image below.

I could immediately relate it to her interest in getting back to animation. I told her that I would get her back to animation. I also tried few other people who were in similar situation. Later on hospital setup training facility and used my devices to train others in need.
I remained in touch with Sagar and sometimes Charu (her brother used to type on her behalf at times to make her communicate). She and her family were trying very hard to get her treated and she was not willing to give up. Time passed by and in 2016, I along with my daughter and son in law visited Jaipur(after my daughter returned from USA completing her PhD) to celebrate Diwali with her in laws. Seeing my post on FB, Charu messaged me and informed that she is in Jaipur too.

We decided to meet so that i could see her condition. She had slight improvement with some movement in her left hand finger. She could type by keeping her mobile/tablet in right hand and use slight movement of left hand finger to type. It was not easy and was very painful. We met next day and I suggested that she can connect her phone with laptop and also use voice based typing to reduce use of her fingers. She quickly picked up the skills and started learning use of laptop by borrowing one from her uncle. Now she was in position to use software on laptop to do some professional work. I suggested her to use voice based work by either dubbing, doing voice over or voice editing to be economically productive.

For this work, she needed some training to get started. I discussed with Mr Ashutosh Singh, Music Director from Mumbai to help out. Mr Ashutosh Singh and myself were working together on popularizing Science through a YouTube channel called “Science Wience”. He talked to one of the best voice trainers from Bollywood, Mr Anil Mani. Mr Mani gave one or two sessions of training to Charu using skype. After this Charu started to learn on her own through YouTube videos. We started to interact more frequently now. I also suggested her to participate in “Miss India Wheel Chair” competition as 2015 competition was won by Ms Priya Bhargava after I suggested her to apply for the event. Charu was hesitating and said she is more happy being backstage!

She wanted a better wheel chair for herself and I got her an appointment made in AIIMS, New Delhi towards end of Nov 2016. After being examined here, she was given a better wheel chair. She also desired to meet me and I visited AIIMS along with my daughter(who had also worked on assistive technology). We also took some photographs here for a news paper article that Ms Prachi Pinglay wanted to write on rehab efforts of Charu. https://www.outlookindia.com/website/story/left-hand-of-lightness/297454?fbclid=IwAR2_zG1D2Vu_DbKt98eJUAphdO80aQxeUs_qsOZAtwvrfnqt27e-1L4nCr8

As Charu improved in her voice editing skills, Mr Ashutosh Singh decided to give her a chance to use her skills for our YouTube channel. I was discussing with her one night (Dec 20, 2016) about her wheelchair and towards end I mentioned that I have a task for her that I would discuss with her next day as I needed to finish preparing a talk to be given in morning.

After this chat, we did not connect and it was Jan 17, 2017 when one of my ex students contacted me. He said he was Charu’s relative and unfortunately she is no more due to a viral infection that she could not recover from. It was a very shocking news as Charu was just getting started to get back to Bollywood again! But that was not to be the case and a beautiful and brave life was lost.

As I was writing this blog, I came across a one month old news where motor accident claims tribunal has ordered the owner of a Honda City(which hit her auto) and an insurance company to pay over Rs 90 lakh to the parents of Charu. Money can’t bring back Charu now but it would help her family who suffered tremendous financial burden in addition to emotional grief. https://www.freepressjournal.in/entertainment/bollywood/rs-90-lakh-payout-for-kin-of-animator-in-shah-rukh-khans-red-chillies-entertainment

Prof. Ranjan, you did and continue to do wonderful things.

What a great loss. It’s inspiring how you could help her in most demanding times.