We started our Netarhat Journey at the ungodly hour of 4 O’ Clock in the morning. This was to avoid getting blocked by a call for Bandh given on the day of travel (10th Dec. 2003). I had the driver bring the Tata Sumo previous night. We loaded all the computers and other items early morning at 3:30 and started our journey with lot of anxiety. Some stretch of road had so dense fog that nothing was visible but thankfully it was limited in extent. We were 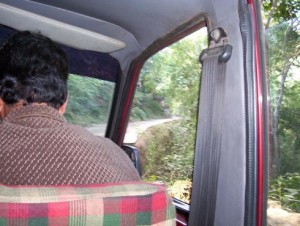 cruising nicely and crossed Lohardagga without any incident.

Next we came to Ghaghara around 7 AM and were stopped on the way and asked to not proceed any further. Help from Police through Varun Mishra proved nonstarter as the roads were blocked by trucks. We waited for an hour or so and took help of local leaders, who helped us in gettting ahead. They also gave us names of their local unit leaders in case we faced any problem.

We were again stopped near Bishunpur and had to wait for 15-20 minutes before they let us proceed. Next stop was at Banari where bandh supporters were sitting on the road. But they let us go without any problem. After this we crossed Koel River and were little relaxed. I took the first photograph (using the Kodak digital camera that we have donated to the school. Pictures here have been scaled down in resolution to suit the low bandwidth of internet.) of the day showing going up the valley. Now we started moving up the torturous climb to Netarhat. Road did not seem to have changed much. It was difficult to say whether it had become better or worse as compared to earlier. 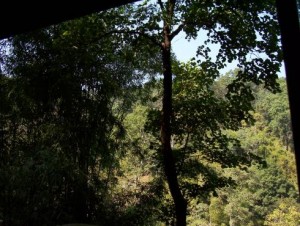 On The Way I kept clicking along the way in the hope of capturing some beautiful scenes to share with all of you.

We have reached almost near the top of the valley and the school. 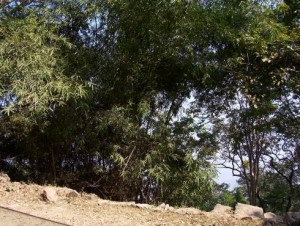 Students seeing the Movie Finally we reached the school around 11:30 AM. Thanks God, we, the vehicle and all the equipment survived the Bandh. As I entered the gate Anil Singh (188, my batch mate and now a teacher at Netarhat) immediately recognized me after 27 years. (Of course he was expecting me. I am not sure he would have recognized me in an unexpected situation.) We immediately met Principal Karn Jee, who was visibly relieved seeing us survive all the disturbance. I also informed Varun Mishra (SP, Lohardagga and hatian) immediately that we were safe.

After some food (we had none since the earlier night due to Bandh on the way), we started to unpack the computers in the old aero-modeling room. Electrical work was going on in Old assembly hall. We went and finalized the layout of furniture and the electrical points. 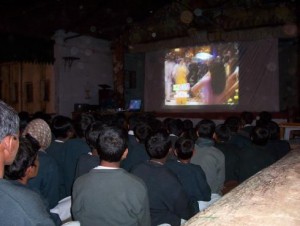 I made the suggestion of inaugurating the projector by showing the students a movie on the 10th evening. since they were going away on 12th for vacation. It was agreed but turned out that Sixth Set had a Sahbhoj arranged at the same time. Anyway it was decided to manage both of them. A new white screen for stage was taken out and fixed on the stage and after some tightening of the screen to remove wrinkles, we could get an acceptable quality of picture, clearly visible from back. It was fortunate that Video CDs are easily available in netarhat now (Progress!) and Amitabh Bachchan starer “Baghban” was selected to be shown. I did not know that the tradition of showing movie had stopped nearly 15 years back when TVs and VCRs had become available. So students were seeing movie together after that many years. They watched the movie in pin drop silence until near the end when they clapped several times. I was planning to go back to the computer installation but continued to watch the historical movie show (of course, I had seen the movie earlier, courtsey ICICI bank), just in case any technical difficulty arose. Movie was shown on the generator so electricity was not a threat. It was great feeling being with all the students and watching movie in Netarhat workshop. 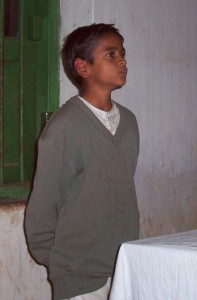 Young kid reciting poem After the movie we were invited to the Sahbhoj being hosted in Sixth Set since there was a change of Ashramadhyaksha in one of the Ashrams. Before this a small cultural program was organized. Of course after the movie people were ready to move to dinner fast but this young kid on the right (who had just come couple of weeks back to the school) captivated everyone by the beautiful poem he recited. He was so small that his dress was oversized. But looking at him and other sitting below in the room, netarhat does not look any different from our time. 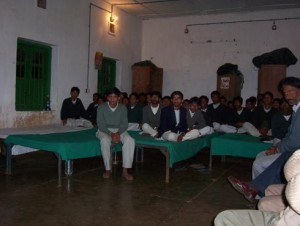 Special Assembly
Next day (11th Dec) was the last day before students went on winter vacation. Karn Jee warned me that there was a special assembly in the morning and I should get ready in time and be there in all senses. I had to give a talk to the students! Talk part was not much of a problem since last one and half years of teaching in my university has 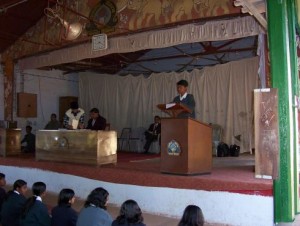 prepared me for that. It was the morning cold that I was facing after long time. Thankfully immersion rod and the availability of the electricity made that task also easier.

Coming to electricity, it turns out that the upgradation of electricity from 11 KV to 33 KV transmission line was in full swing. Due to this they used to switch off the elctricity in the day time and leave it on during night. Voltage was low (110 V lamps worked better! USA in Netarhat(?)) and was expected to improve with the installation of new transmission line. Water supply was normal since electricity was available in night.

This was a special assembly and results were announced. I was given the honor of distributing the certificates. I was lucky to touch that piece of paper since Neeraj and others of my batch always made sure that I did not come in the top three position to be able to receive that paper. So I had all the fun in life touching so many of them at one go. There was a report from the visit to NDA (National Defence Academy) by the students. Anshuman Chatterjee had gone with the students and gave a good report on the visit and also the fact that students had done well. I got my chance of talking to the students for an hour about my career path, my research, my new institute and what we (NOBA Parivar) are trying to do to modernize Netarhat. I am not sure how much of that was useful to the students since they must be thinking about their jorney home next day. Specially keep in mind that 300 of them had just joined and this was their first visit home. 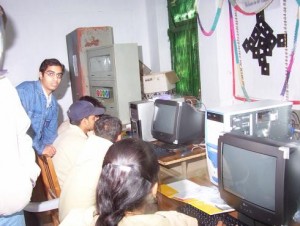 We had a meeting with all the teachers at 12:00 noon in the staff room. We discussed the various requirements of the school where we as NOBA members could help. I have made a separate write up on requirements but there were few requests related to cultural and sports activity. School seem to need time to think about what they need since most of the requirements were vague and details were not available. The requirement for Gym and Yoga facility is urgent and Principal gave me a list, which I have passed to Delhi NOBA for finding out the price etc. Before the meeting I clicked the photographs of as many teachers as possible. I will put this up on the Netarhat School website.

I have also made a list of requirement of the school and will be putting it up on the web soon.

Around lunch time (11th Dec.) rest of my students came by bus since they had got stuck in Ranchi due to Bandh. After brief rest I got them to work on the installation of softwares etc. You can see them at work in the photograph. 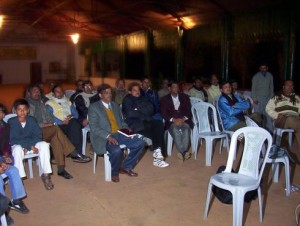 I was requested by some teachers to give them an introductory training in computer use. So I took the revenge on the teachers by trying to teach them. I wanted to use the projector for doing this. This showed the teachers the effectiveness of using the projector as a teaching aid and it made my life simple as well. Of course, I am not used to teaching introductory computer course, so I do not know how it went. But I showed them the various uses of computer: word processing, spreadsheet, presentation software, e-mail, internet etc. I also took this opportunity to explain to them the process we had used to collect funds through web and how status of APCL – Netarhat fund was transparently being shown to any NOBA member around the in the world. How we have used e-mails to discuss issues of mutual interest. Some of them informed me that enthused by our effort many teachers had started purchasing computers. The picture above and below shows the introductory training of teachers going on. 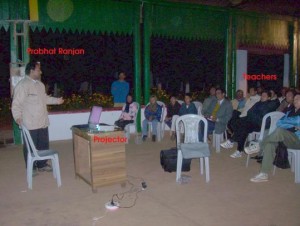 My team members took the opportunity of visiting the sunrise point on 12th morning. Unfortunately, I fell sick in the night and had to take rest. Finally I bid goodbye to everyone and started my return journey at 2 PM and reached Ranchi around 6:30 PM. 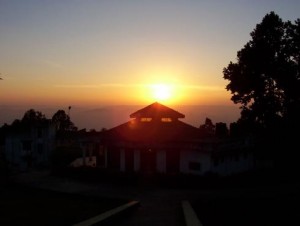 The picture of sunrise on the left and a beautiful tree from the garden of Netarhat School, below.

Finally I wish to thank all of NOBA community and APCL mangement, who came out to support this venture. I also wish to put in record lot of hard work Kedar Jee and others at Ranchi NOBA put in to make this a successful trip. They of course have a much tougher task of organizing the Golden Jubilee Celebration. Good luck! 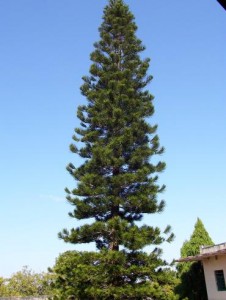