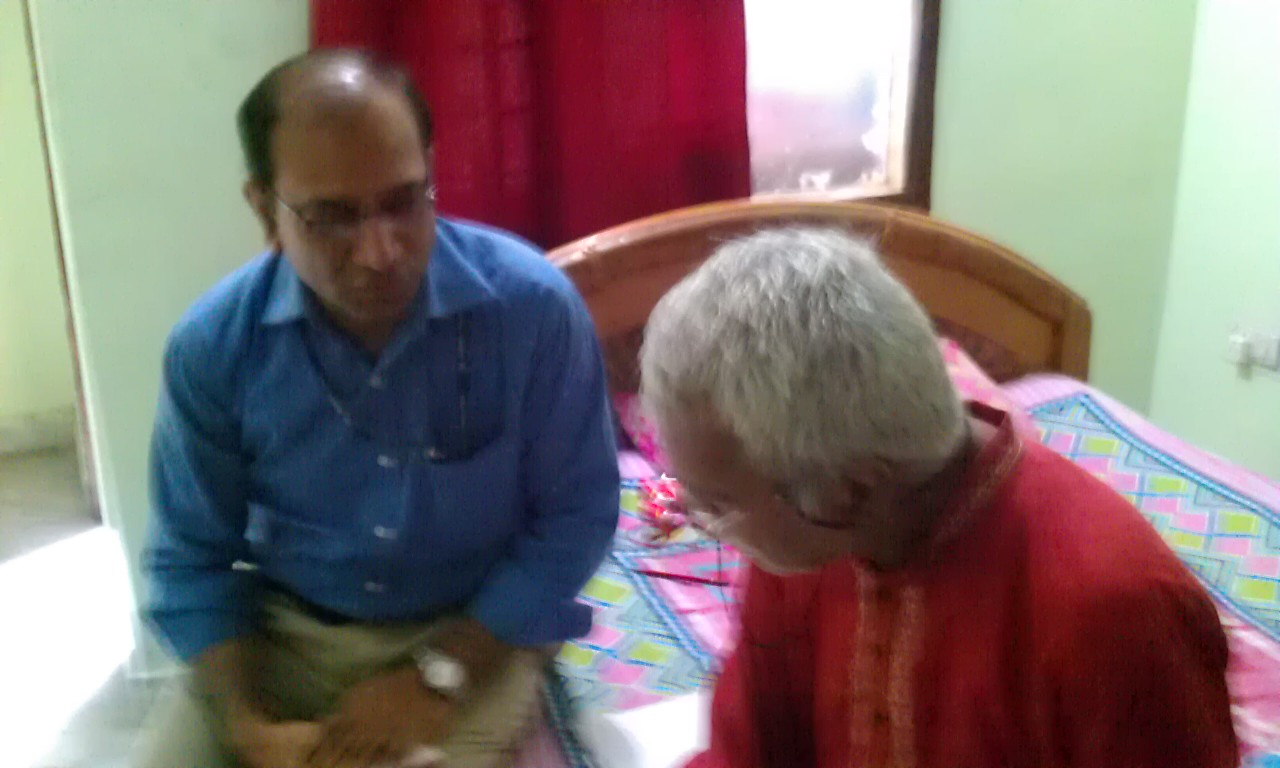  [Edited : Due to lot of wrong facts circulating on Internet, I have tried to collect factual information about Vashishtha Jee. I am sharing the data here. If any one has suggestion to correct it or improve it, please let me know. 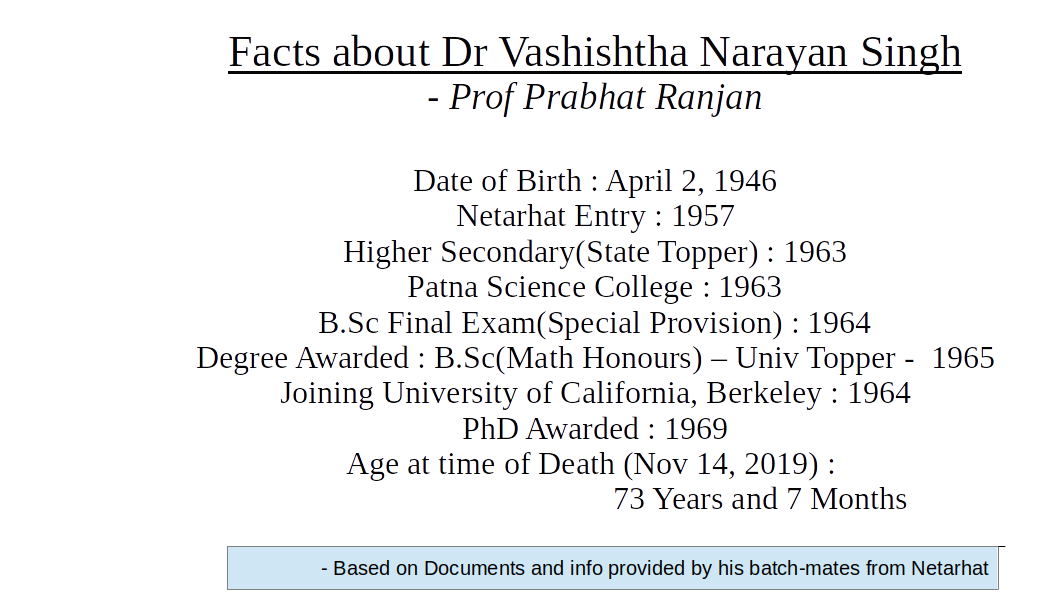 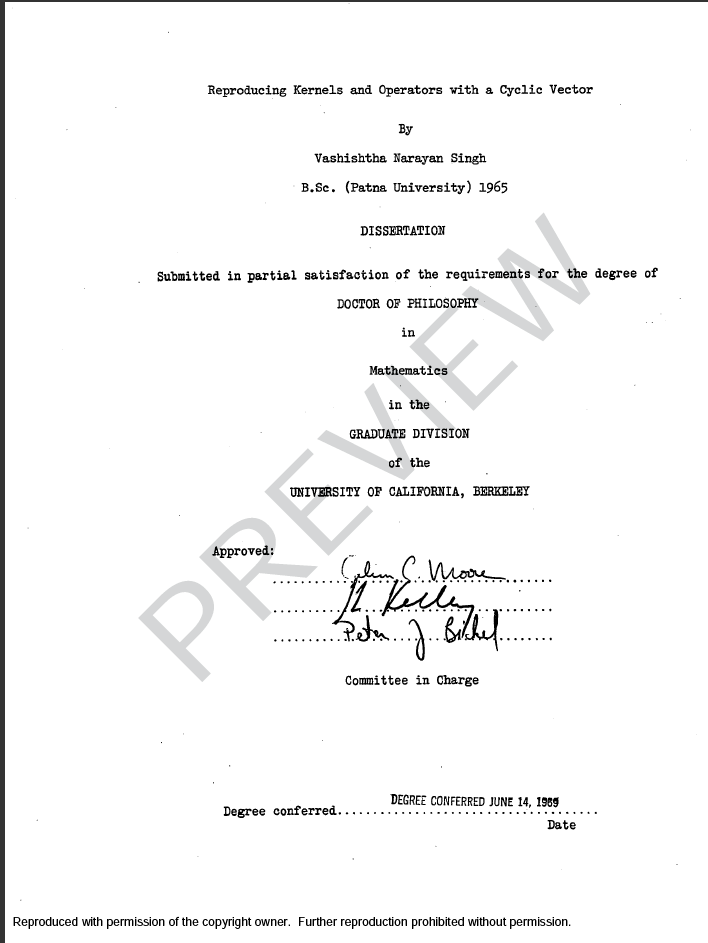 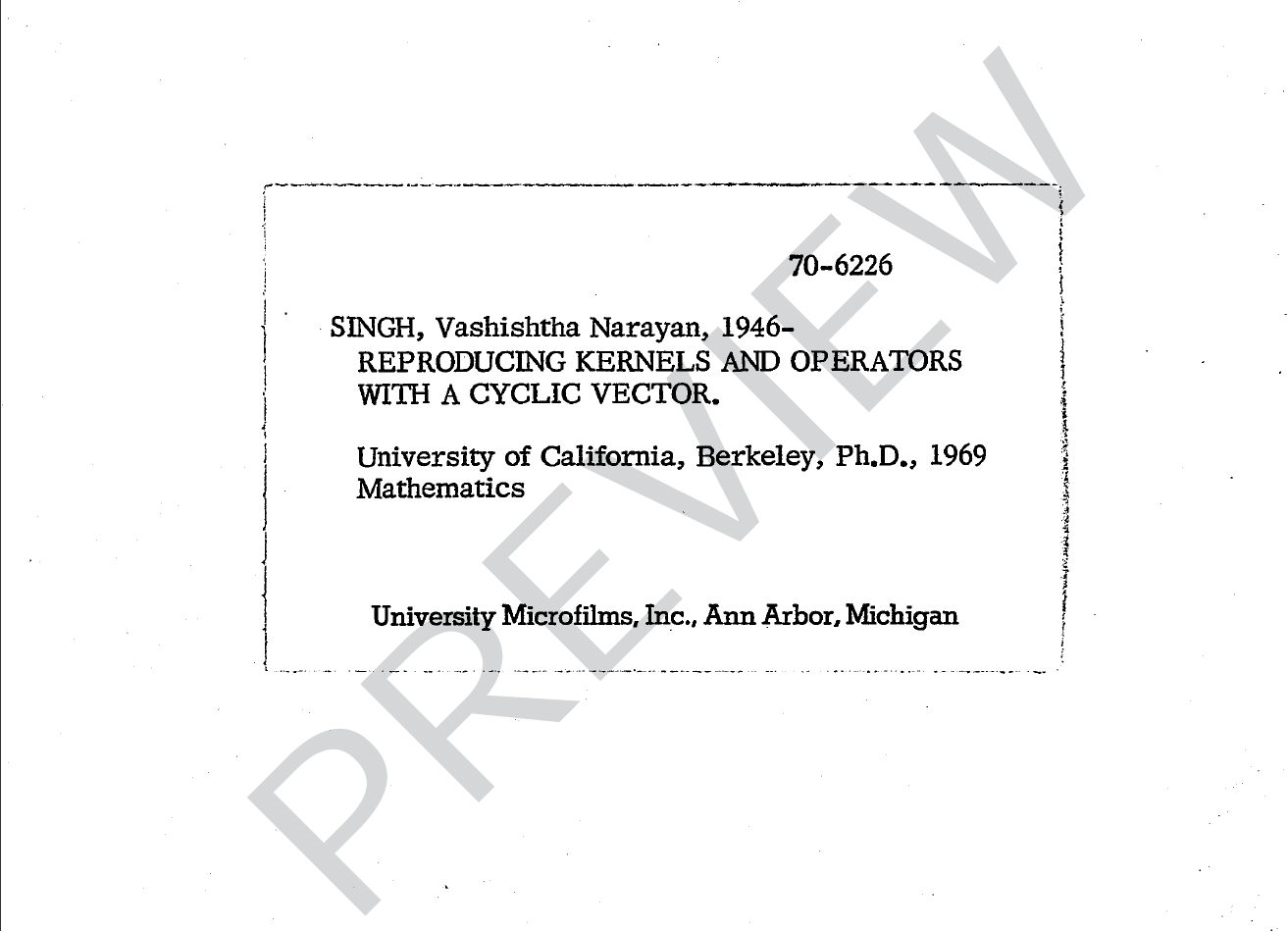 I suddenly saw a message on WhatsApp about sad demise of Vashishtha Jee some time ago(Nov 14, 2019) and did not believe it. I tried to contact Dr Birendra Jee, his batchmate and close friend. He also confirmed the sad news. Many thoughts went through my mind and I felt that I must jot them down.

I joined Netarhat School in 1970. One of our maths teacher, Shri Manoj Kumar De, used to frequently talk about Dr Vashishtha Narayan Singh (Vashishtha Jee). He used to point out the chair on which he used to sit etc.Vashishtha Jee had joined Netarhat in 1957. In 1963 he moved to Patna Science College and got his PhD from University of California, Berkeley in 1969. He had become a legend at young age and was considered a Maths Genius. Internet has lot of information about him – some verifiable and others not. He returned to India after spending few years in USA after PhD. Sometime in 1970s, Vashishtha Jee started to show signs of Mental health problem, later diagnosed as schizophrenia.

I used to be very interested in Mathematics and was among the better students of my batch in Maths. My school principal was worried about me and asked my House Master to keep a watch on me(I was told by House Master Deogharia Jee recently about this!). I moved to IIT Kharagpur in 1976 and luckily followed Vashishtha Jee and did my PhD from Univ of California, Berkeley in 1986.  In fact few days back on Nov 11, 2019, I visited Berkeley campus and was remembering Vashishtha  Jee not knowing that we would lose him soon. 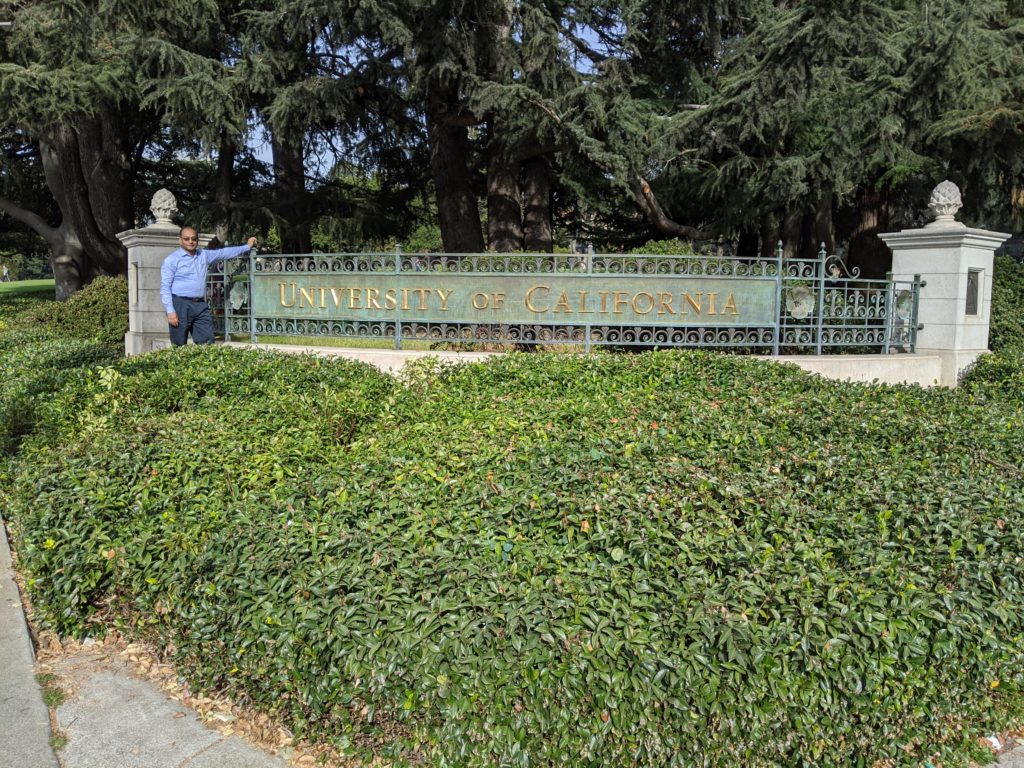 Lot of things happened in life of Vashishtha Jee since 1970s – he was missing for 3–4 years and found in early 1990s. He came into national limelight at that time. He started living in his village. Some time around 2012-13, I got the news that Vashishtha Jee has moved to Patna as a coaching institute has provided him and his family with a flat free of cost in lieu of using his name for endorsing coaching institute. He was supported by his younger brother Ayodhya Jee and his mother also used to live with him. We got news that after about one year coaching institute did not want to pay for his flats as they were not finding it lucrative to use his name.

I have been active member of Netarhat School Alumni Group – Netarhat Old Boys Association (NOBA). For long time I have managed the mailing list and web portal. With help of my elder brother, Vijoy Prakash Jee (Another NOBAite and a Retired IAS officer), we got the coaching institute to support Vashishtha Jee stay in Patna for one more year.  Towards end of August 2013, I was in Patna for some work. I along with my elder brother and Sister in Law visited Vashishtha Jee to see him personally. 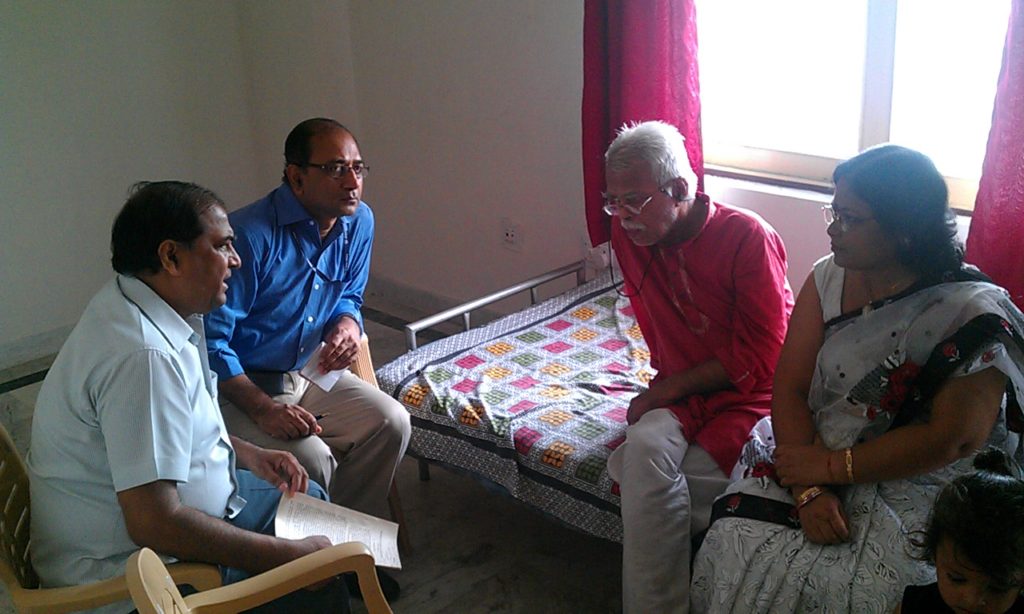 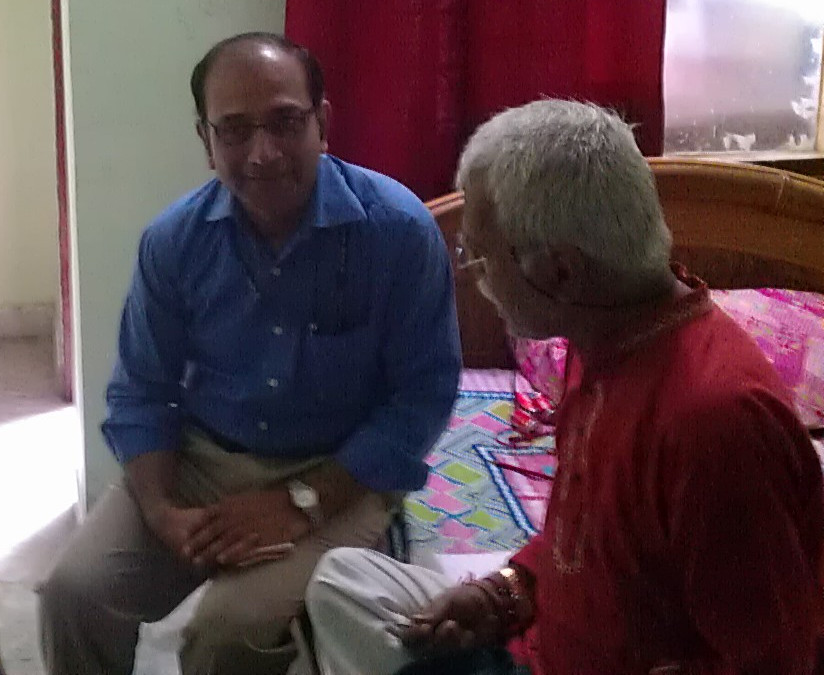 After reaching his house, we waited for him in living room. After hearing that we are from Netarhat, he immediately came out to meet us. We tried to talk to him by starting with things we felt we can connect with him. We asked him from about his batch of Netarhat. He immediately replied – “Chaturth” (fourth batch). We asked him about his Ashram and he replied – “Vikram”. I tried to talk about me having done PhD in Physics from Berkeley – same place he had done PhD etc. However he was in his own world. 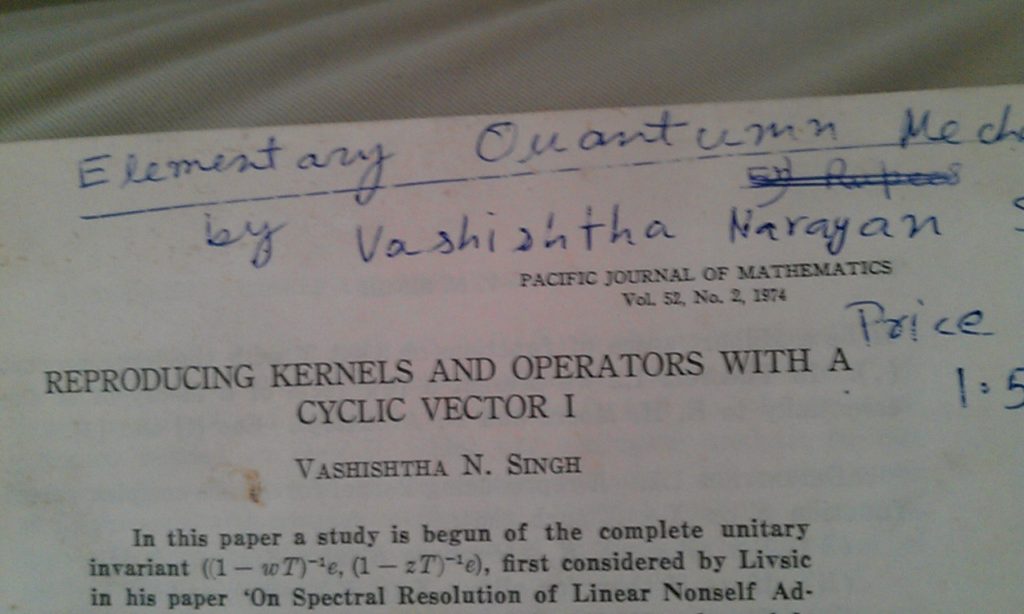 He asked us if we had brought a particular book — we were bit surprised since it was our first personal interaction with him. Then he asked us if CR1 theory has come into text books. We were again surprised and tried to ask him about it. Trying to converse with him for some time, we were not successful in having any meaningful conversation. So we decided to talk to his family members. We were taken to his bedroom. His wall was adorned with all kind of scribblings. 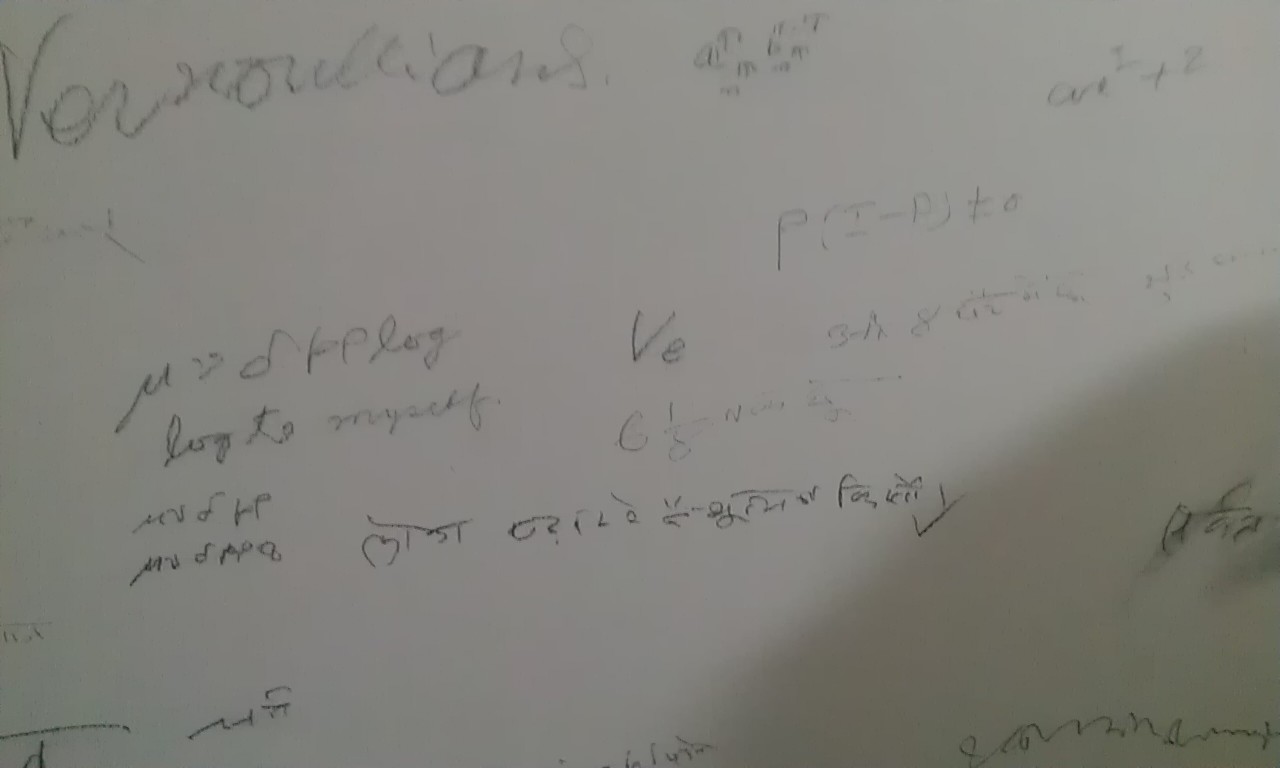 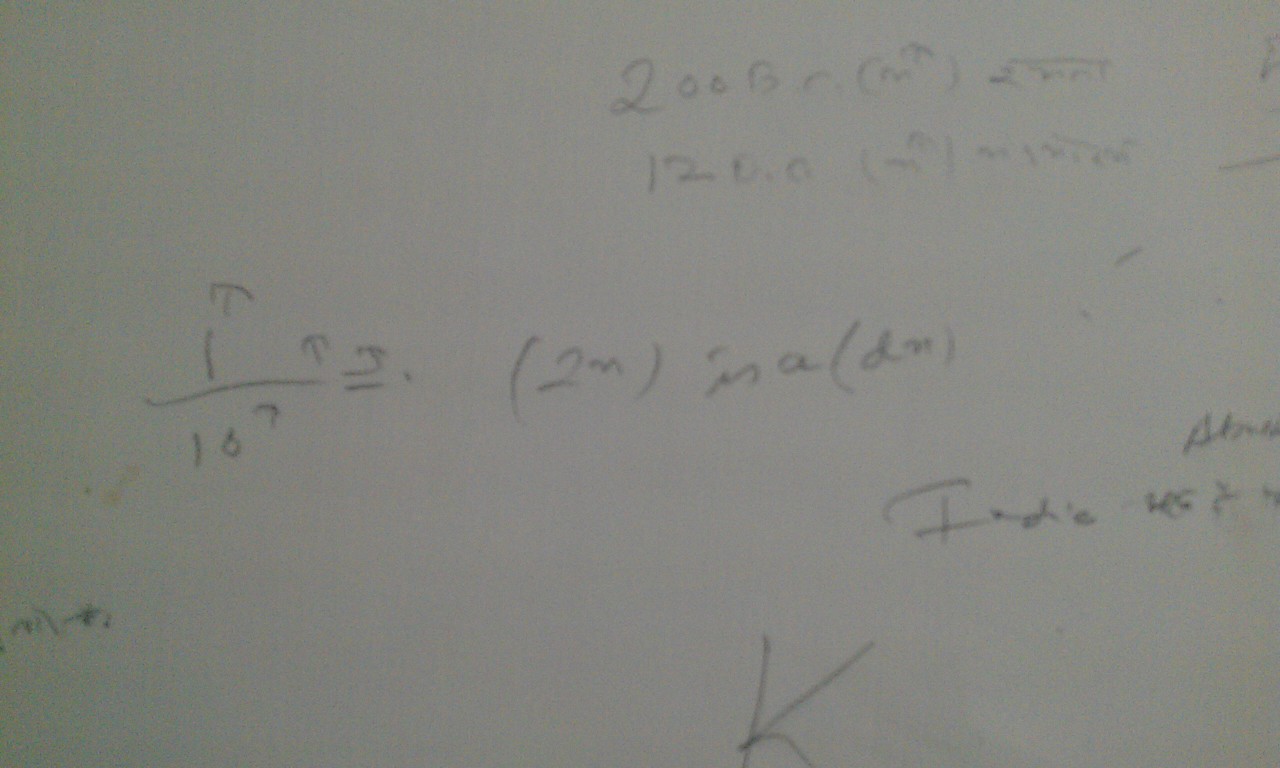 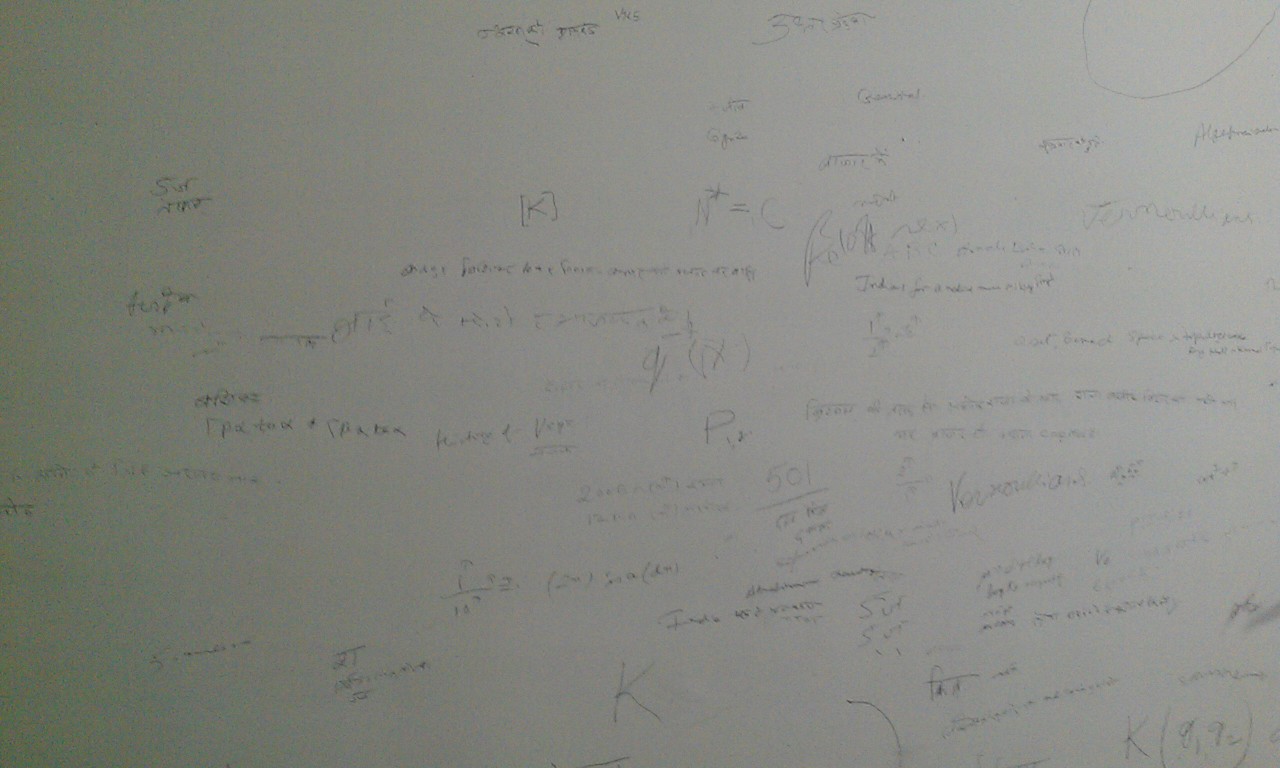 We asked him about his books and papers etc. Family members replied that all his books etc are lying in village locked since they did not want to open it for the fear of people taking things away. We suggested them bringing them to Patna house. They replied that they do not have book rack etc to store them properly. We suggested that with the help of NOBA community, we can try to arrange for all the furniture etc to make his stay better and he may see familiar books etc in his reach. 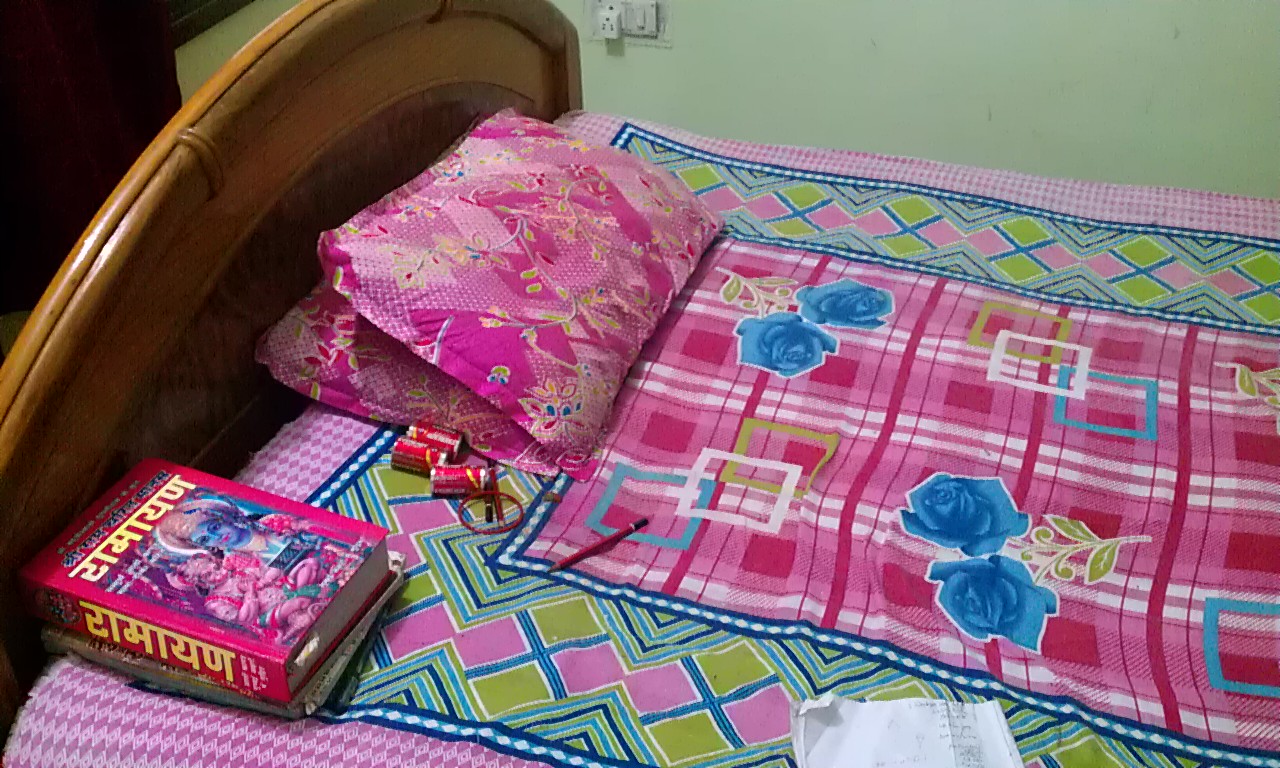 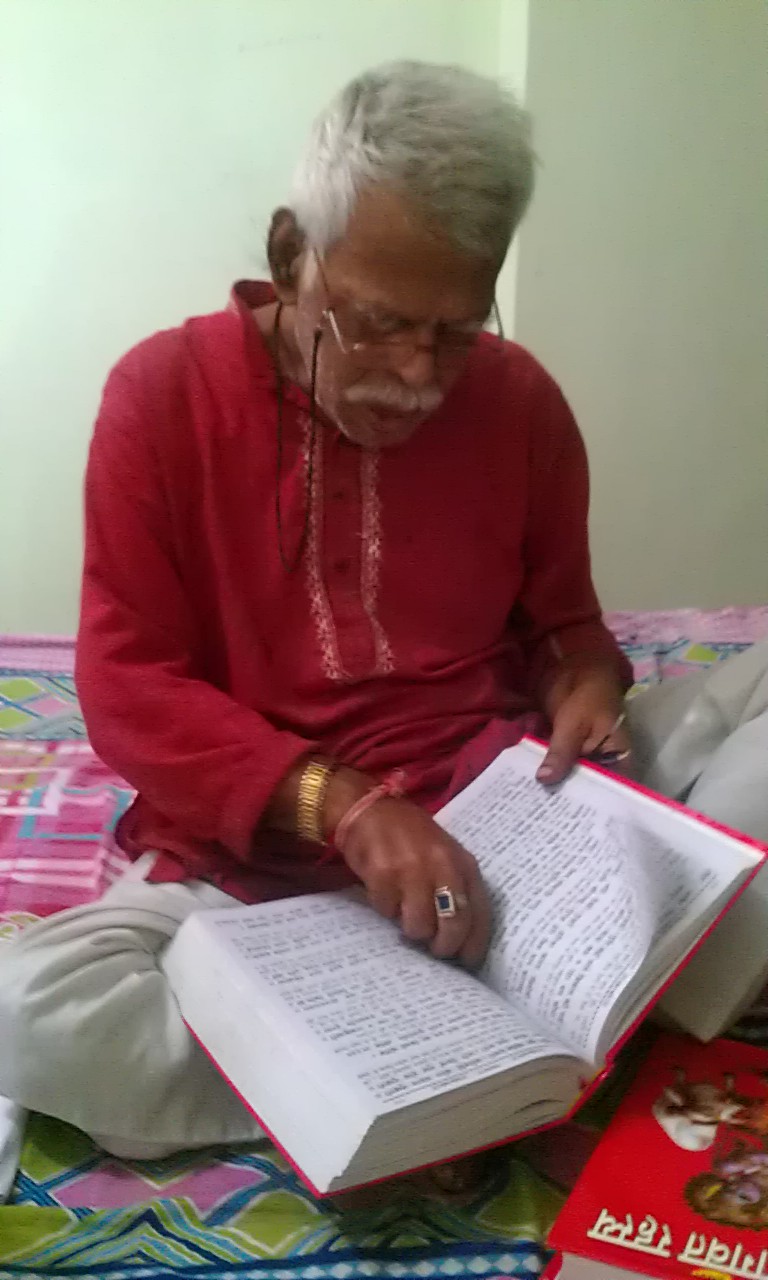 After some time Vashishtha Jee also came to his bedroom. He looked at me and said – “You have done PhD from Berkeley in Physics! That is very tough. “. I replied to him that PhD in Maths was very tough too. He seemed to have agreed to that! What surprised me that while he was not responding to us as we were trying to converse with him but he was absorbing what we were saying. He had also written something on a paper, where he tried to explain what he meant by C-R-1. 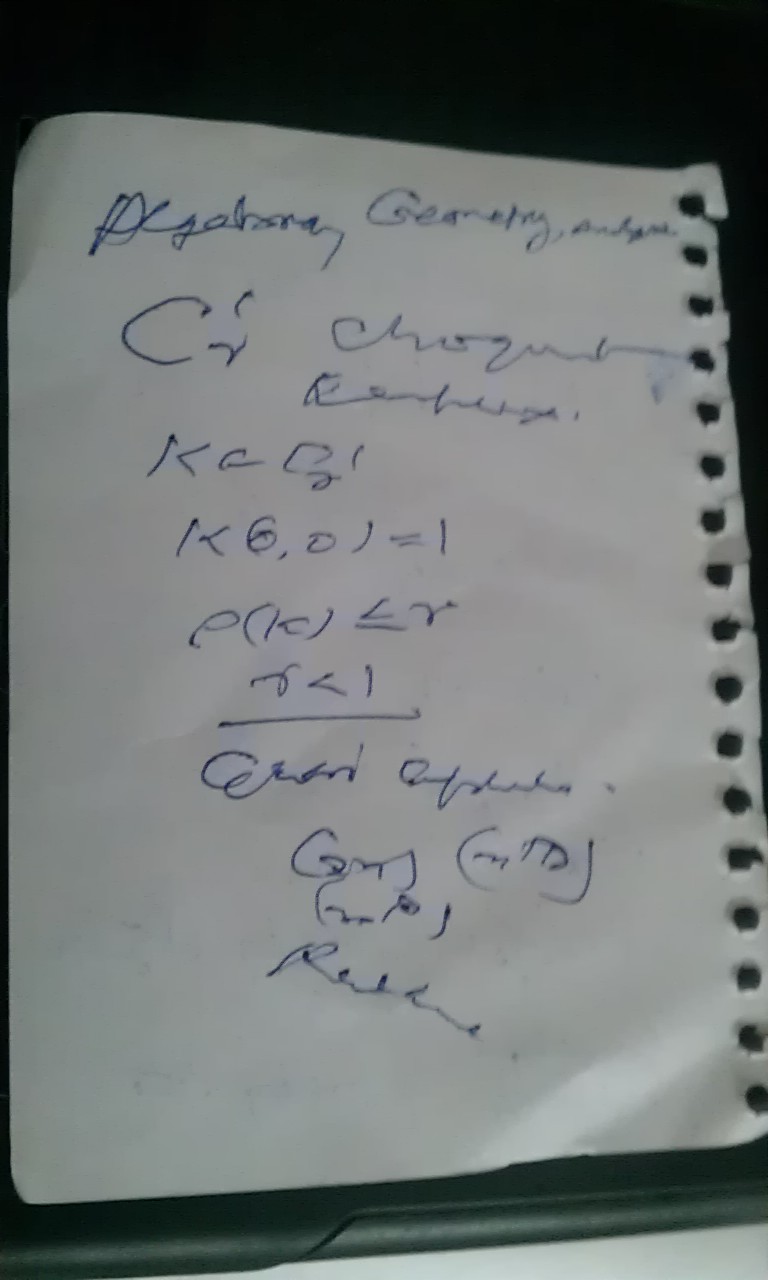 In few weeks time all furniture items were arranged and his books etc were moved to Patna. 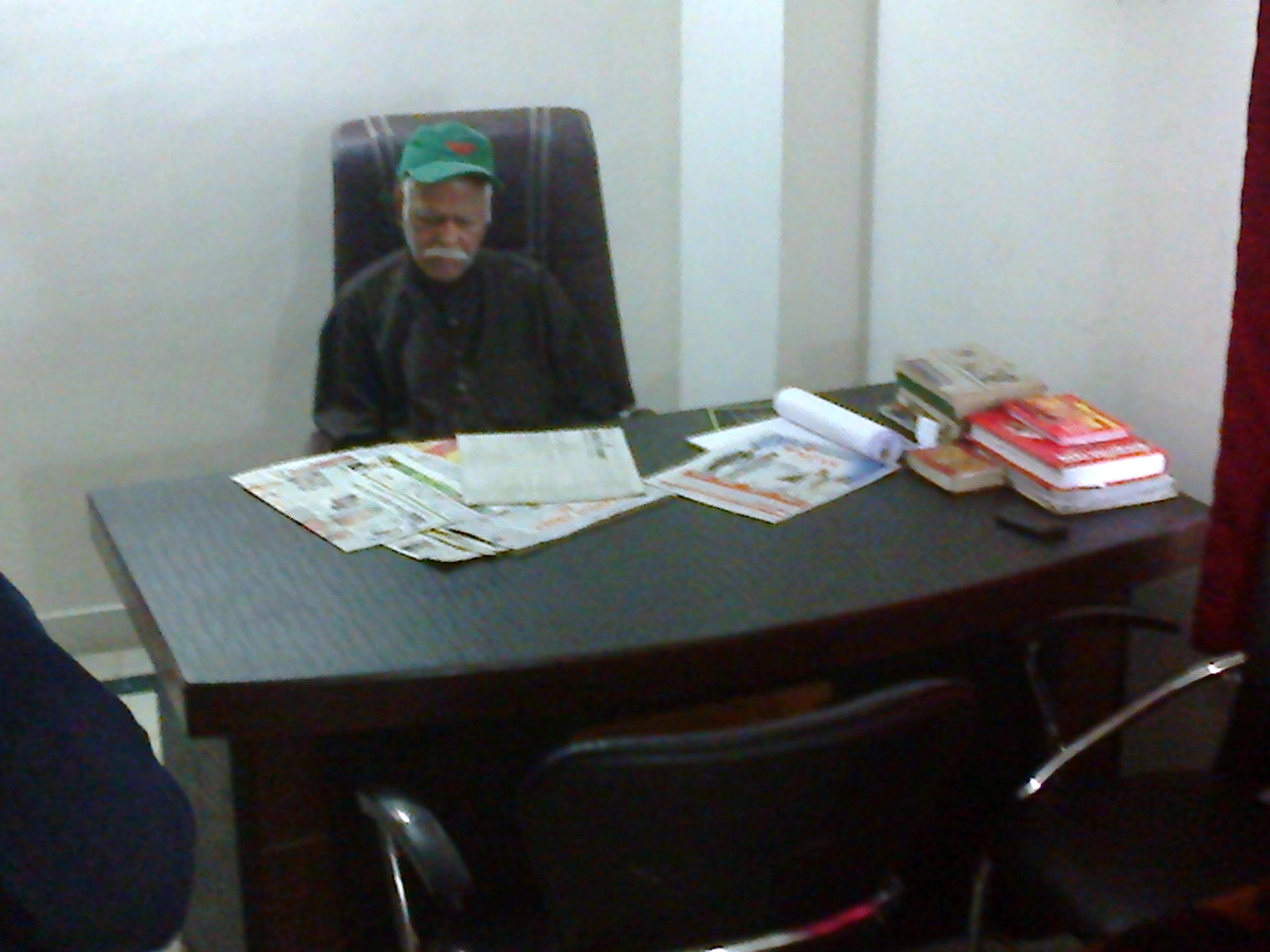 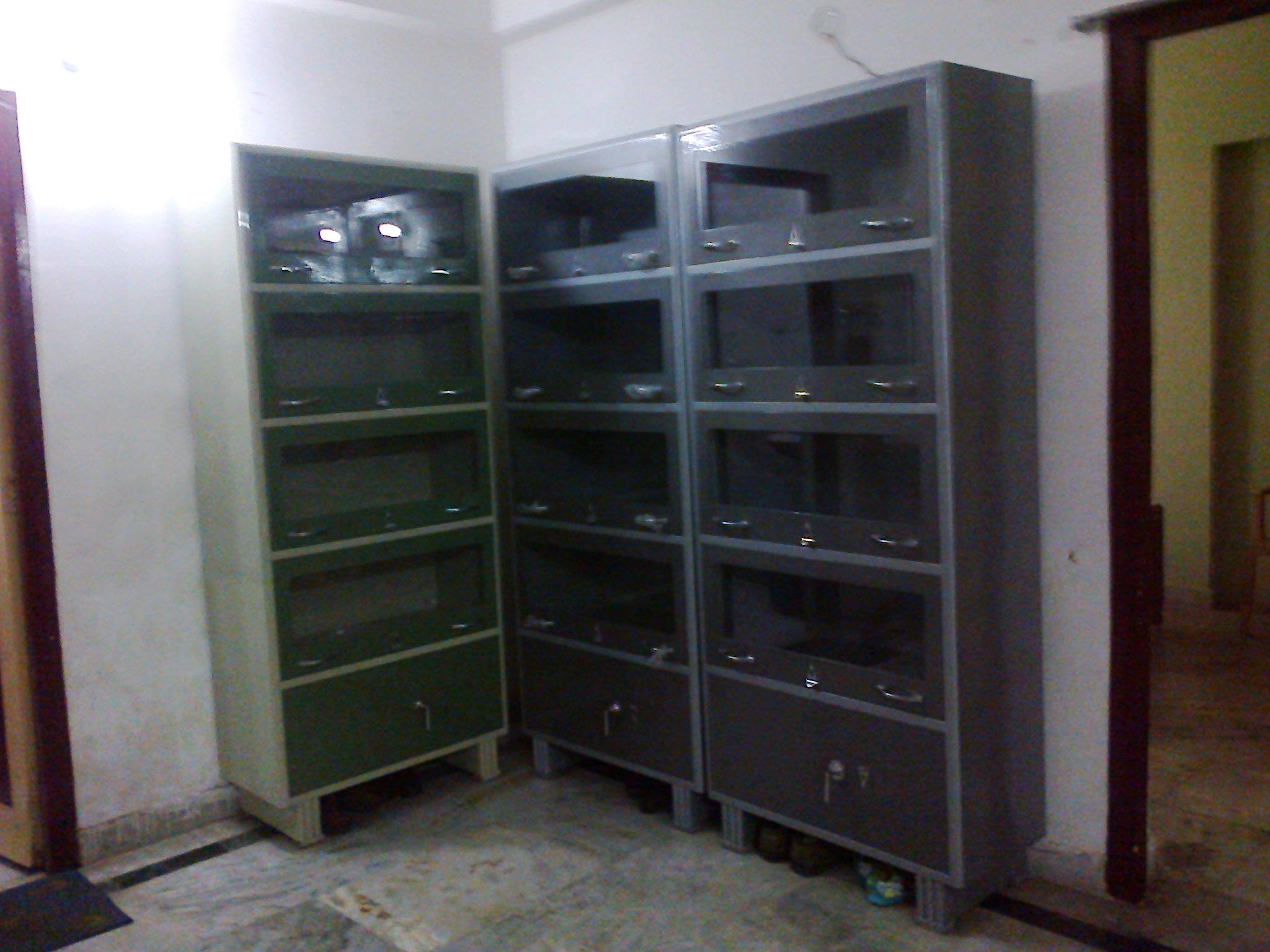 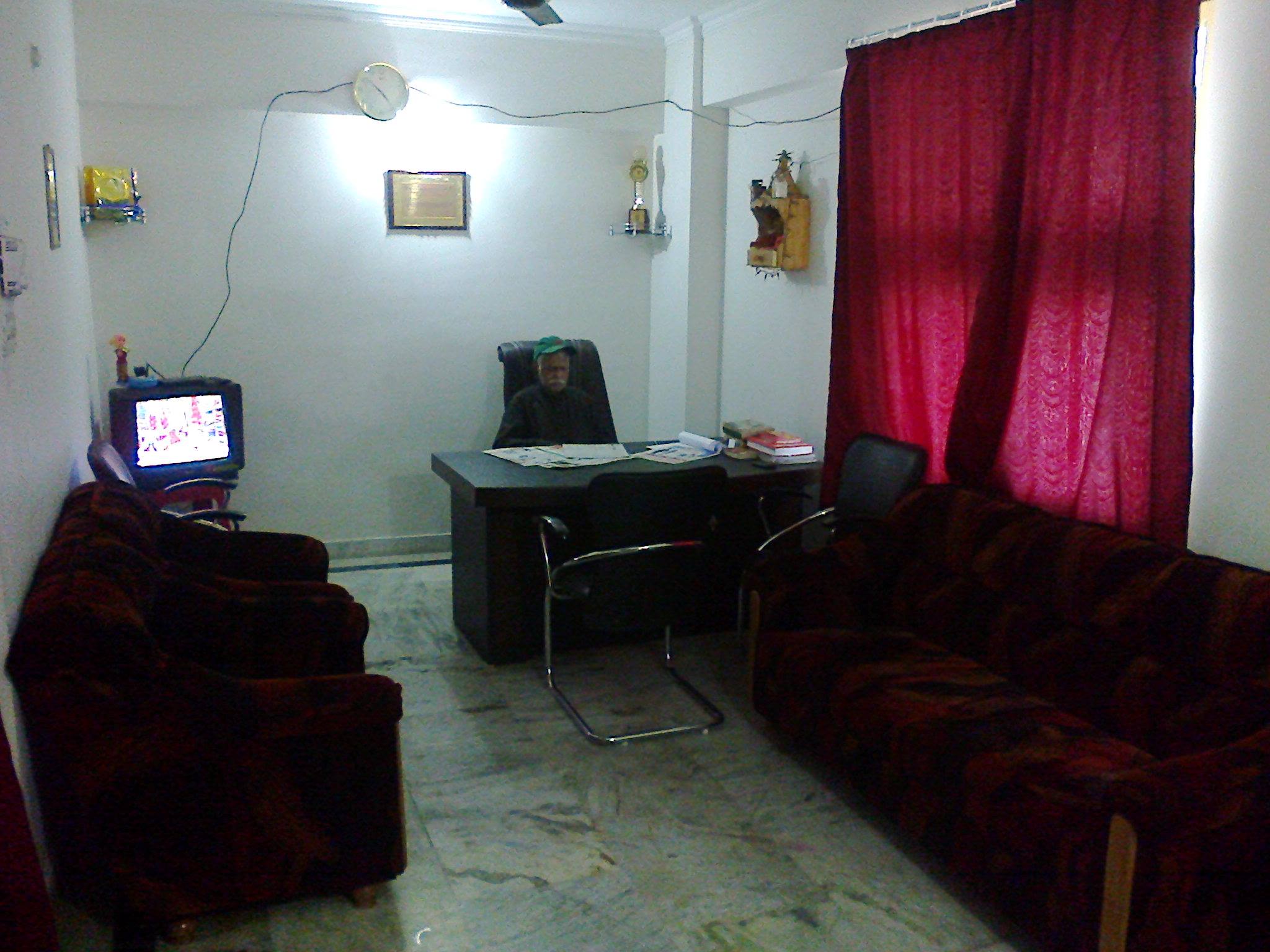 I also suggested that they could play a particular sound wave (binaural beat for deep sleep) at night to see if he gets better sleep. Family members reported later that sound wave did help him and he was calmer. He also tried playing “Tabla” – something all Netarhat School alumni learn right at entry.

Coaching institute did not want to support his stay in Patna after second year so I arranged to get funds through NOBA community to let him stay in Patna so that he can get better medical attention. Till about 2018, I was managing this and later on at my request other NOBA members came forward to continue this support system.

About 3-4 months back, we were having a NOBA Pune get together. Dr Birendra Jee (batchmate and a close friend of Vashishtha Jee) was also present. I was with him as we were discussing issues related to a controversy about a biopic based on his life. Suddenly he got a call and started to talk in Bhojpuri. After few minutes he passed on his phone to me saying that talk to Vashishtha! I tried to converse with him a bit on phone. I was pleasantly surprised that he was using a phone and doing some meaningful conversation. That was the last I heard his voice.

Now he is all over media since he is no more with news about his body lying outside hospital on stretcher for long time with no ambulance in sight. Bihar state govt declaring his cremation with state honours and so on. CM, PM , Media all taking their turn to mention him as “great son”. I remember similar media coverage in early 1990s when he was found loitering around his village after having disappeared for 3-4 years.

I wonder why media and politicians get active only after negative news!

You are very correct in underlining your last sentence.

Heart touching Story!!! At the same time feeling pity to see and know the conduct of our . Govt. should feel ashamed. Saddened with the demise of the great personality of the era

iSalute!!!! to our great legendary Resp, Vasheesth Ji on the great journey which can be followed by all time newer generations . Yes, some obstacle leads such deviation from his well- deserved path and honour but we Bihari and Indians are all in this together to salute our hero and great mathematician forever. I appreciate Sri Prabhat Jee too for writing a great and meaningful blog in very much sequential way to understand everything clearly. Mee too very sad on this sad demise and the neglects all around during his old days by our authorities.

We are Very unfortunate to miss him despite having him during our time and also not able to take due care of him as a society.

Thanks for the article. The care shown by NOBA is exemplary. The description of the meeting gave us an insight into the innocent yet tragic life of a legend, whom we look up as an inspiration. Such people are a gem in the pile of stones. May God give peace to his beautiful soul !!

Very authentic and genuine article. Nation lost a great intellectual. Hope people learn from the ignorance and come forward for such outstanding Indians.

I am curious what the CR1 theory is , please explain.

We also do not know since it was Vashishtha Jee, who wrote it out and asked if this is part of text book!