Since joining TIFAC in April 2013, I have been learning many things that never crossed my thoughts due to my research focused on S&T for Nation and Society. I would like use this blog to share some of the issues I have been talking about at various forums so that the same is available to larger audience.

Due to India’s exports taking a nose dive couple of years back by nearly 20-25%, Govt of India set up an Inter Ministerial Group (IMG) to look into the issues that could help restore the export. One of the need was to infuse technology in some of the MSME sector. TIFAC along with DSIR was entrusted to take action along this line. TIFAC had discussions with Ministry of Commerce and Ministry of MSME on the issue and four areas were identified:

I wish to talk about the last one here – Guar Gum. I was familiar with Guar beans since it was very popular in Gujarat, where I have lived 18 years. When I heard about this to be looked at Export potential point of view, I was very surprised. When we returned to office and looked at the statistics, it was mind boggling. Guar Gum (Guar seed powder) has its use in industry of various kind including Oil and Gas industry. It had nearly Rs 3000 Crore as export and then jumped to Rs 21,000 Crore suddenly and became number one farm export from India exceeding rice and cotton exports. The reason for this sudden surge was not difficult to find. With fracking (hydro-fracturing) technology developing successfully,  “Shale Gas” production started to ramp up in USA. Guar Gum is used in this process and demand for it shot up suddenly. This put pressure on supply and prices went up also. Total export jumped to Rs 21,000 Crore.

TIFAC took up the study of Guar Gum export and worked with various stakeholders and experts and prepared a report on this, which was submitted to the relevant agencies. TIFAC also published a newsletter on this and can be seen here: 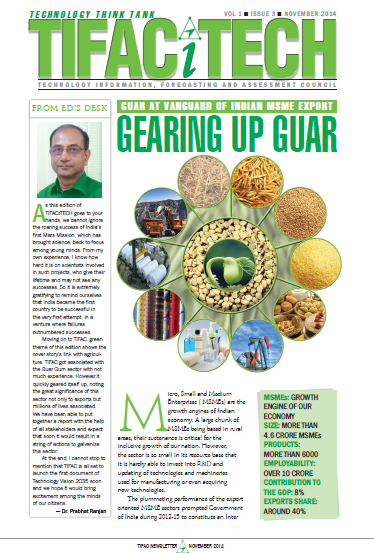 While TIFAC is working with various other agencies to take care of various issues identified in the report, I would like to highlight a couple of points here, on which I would build rest of the story:

1. India exports Guar Gum to the extent of 80% of global export. However almost no value addition is done in the country. Price of Guar Gum derivatives jumps 5-10 times compared to raw material. This shows that if we could do value addition withi

n country before exporting, we have an earning potential of more than Rs 50,000 Crore per year.

2. TIFAC did patent analysis of Guar Gum sector and found that of the nearly 12,000 global patents, India holds less than 1% of patents. This clearly shows countries lack of focus on its own strength and proper mechanism to ensure this.

TIFAC has now started to work on a report, which would identify all such raw materials where we are major global exporters without value addition. There are 100s of such materials and I would not even hazard a guess about how much export earning potential this represents!

There is a lesson to be learnt from history in this. India along with China manufactured between 20-30% of global products till about 1750. Look at the chart below carefully. After this India’s manufacturing kept dropping to less than 5%. However during this period export of raw material continued to grow to feed Industrial revolution taking place in Europe. India in turn also served as big market for products manufactured abroad. 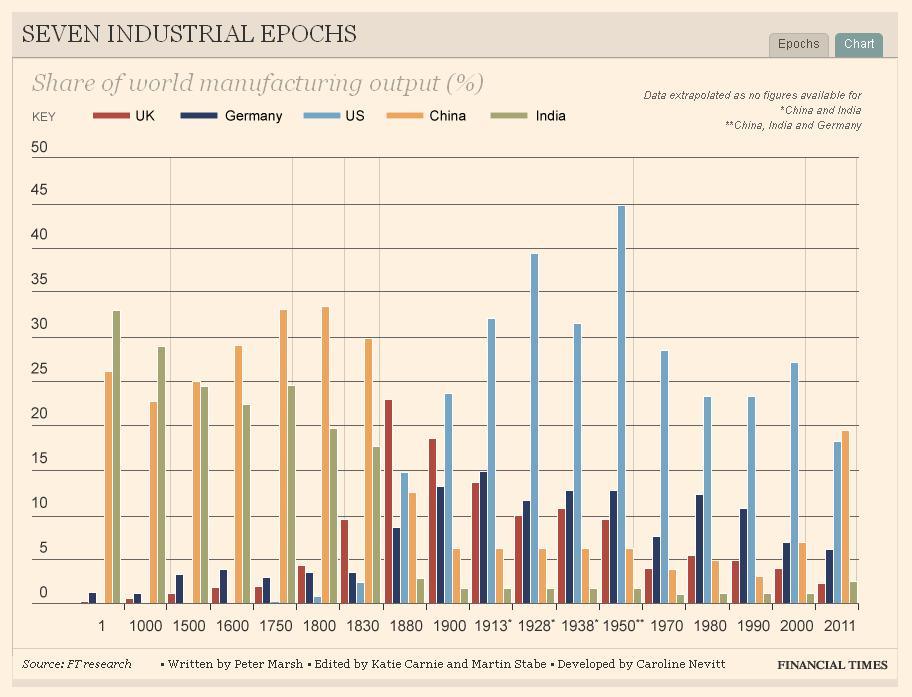 Unfortunately,  situation has not changed even after India became independent and enormous amount of wealth is leaking out of India in the form of raw material. Unless India takes major steps to correct this situation we would continue to remain poor. Mr Shashi Tharoor also talks about how raw material was taken out by British and local manufacturing destroyed by them.

I was aware of the huge export of guar gum. Had followed the share prices of one of teh companies exporting it in a big way. But I confess the idea of value addition never ocurred to me. And I still dont know why its exports peaked out so soon. Is there any competing product? Or are teh exporters under-invoicing to collect (and keep) the monies overseas? I dont think so but nothing is impossible.

Shale gas production is linked to oil prices. Higher oil prices makes it more economic. Thus fluctuation in oil prices has an impact on Shale Gas production and subsequently on Guar Gum export. 2-3 years back prices of Guar Gum went up absurdly high due to various reasons and then it crashed. So peak was artificial.