(For those, not aware, Tokamak is a device used to confine very high temperature plasma to produce energy using controlled nuclear fusion. As of now these are not in commercial use but at research stage. But we are getting close, like we have been saying for last 60 years !!!) 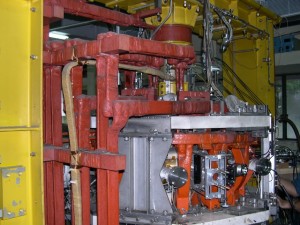 When SINP Tokamak installation was going on, Japanese Engineers from Toshiba came to install the machine as it was manufactured by Toshiba in Japan.

I was trying to develop data acquisition system in parallel since no data acquisition system was supplied along with the machine due to cost reasons. Couple of Digital Monitors(DM) were procured with the machine, which had GPIB (or HPIB) interface. No one in the group had any idea about interfacing such a system to computer as it was still 1986-87 period. We did not have a single PC in the department. I had a personal computer that I had brought from USA, while returning back in 1986. I was well exposed to computers due to my keen interest in it since my college days and also had tried many funny things during my PhD days. My only experience of hooking up something to computer was related to developing a software to connect Apple Macintosh computer to Wang Word Processing system through a RS-232 cable to transfer my PhD thesis.(May be another blog would cover that!)

In discussion with one of the senior scientists, I decided that it would be essential to acquire data digitally for any meaningful analysis of Tokamak data. So I started hunting around to make this possible. I looked up at technical literature, talked to vendors and finally figured out that it would be possible to get a GPIB add-on-card to PC to connect it to DM. I found that IIT Kharagpur has got one card and decided to make a trip there to see what they had. It did not help much as they had a printer from HP with GPIB interface and they had used that card to interface the printer to computer for which driver was provided by manufacturer.

Eventually I found a vendor, who would supply me such a card in India and I placed an order for the card along with a PC/XT (or was it an AT ?). PC was to be delivered by March 31, 1987. Vendor came to me a few days before that and said shipment has arrived at airport and if SINP gives him authorization, he would collect the shipment on our behalf and deliver it. I agreed immediately and SINP gave him an authorization letter. Little did I know about Indian vendors at that time!

That person came a day or two later and said that something terrible has happened. He only found some waste material and bricks in the package and PC is not there. He would have to get it shipped again but I should not worry as it was insured. It may take another couple of weeks for it to come. I was somewhat surprised but did not think of anything funny. It was only later I realized that he collected the shipment and gave it to another client, who must have been demanding an urgent supply before March 31! (closing period of financial year).

Anyway finally I got PC and GPIB card some time in April 1987. I immediately got around to try to interface this to GPIB based device. I found that card would start working and then stop suddenly. Eventually I figured out that it was due to some mechanical misfit and added some packing to make sure it remained at its place. I now tried to connect a simple GPIB device. I found one expensive multimeter, which has a GPIB interface. After some trials, I found that multimeter was responding to my commands from PC but when I tried to read data, it would not work properly. I kept trying various things and nothing seem to work. Once I noticed that it did respond but not what it was supposed to do. Somehow it came to my mind that the command I am sending is not what it is receiving. I suspected cable and discovered that one of the connecting wires was interchanged even though it was supplied by the manufacturer. This led to data bits being interchanged! Once I got that corrected, it started to respond properly!

Now I got on to my main task of interfacing to DMs so that we can collect data from Tokamak discharge to computer. At that time we had to use Fortran to do all programming. It was a great effort to get things working and finally have an interactive GUI as well.

However what was is more interesting is how I got a chance to finally hook up the system to Tokamak. Japanese engineers were installing the machine and I used to work in the control room. They had brought all tools and measurement system along with them. When the system was nearly installed they started energizing it. It must be around July 1987 or so. My system was also nearly ready and I was eager to connect my system to real data from machine. However they would not let anything be interfaced to machine at that time.

While there was no guarantee for plasma performance, engineering system such as magnetic field etc were guaranteed by Toshiba. One of the key magnetic field is Toroidal Magnetic field, which is produced by TF coils. This was supposed to produce 2 T (20 KGauss) and its measurement was being done by a coil, whose output had to be integrated to get the value. Japanese engineers had brought analog integrator and they were using that as they did not want any other system to be tried out. As luck would have it, they were getting a value of only 1.98 T – a tiny bit less than the expected value. SINP engineers were making a fuss about it and Japanese were perplexed.

I saw an opportunity there and suggested that they could try my Data Acquisition System using PC, where I had written a digital integration utility. As they did not have any other choice, they reluctantly agreed to use my system. I gladly hooked up the system and we carried out trial measurements. And lo and behold, it gave 2 T as the value which was needed to save the moment. From then on, they started depending on my system and my system got hooked to the Tokamak in the process!

This was my initiation to the world of data acquisition and control using computers and it has remained with me till now in some way or other.

Felt great to feel a part of your adventure! But you will appreciate my limitations in the field! Bravo all the same and look forward to more.

Excellent Chacha! I remember the day I fainted on seeing the Tokomak. However, your story is a testament to the difficulty in doing research in India and in the same vein, the concept of frugal innovation or jugaad, that so excellently works here. While reading about the ITER project the other day and I wondered if the first fusion reactor would have come in India…

Thanks Prabhat Saraswat. Yes I did share some of these in my conversations. I thought to start penning these down as research effort cannot be realized simply by counting papers published. We have to do many more things in solving real world problems. I hope to keep adding more of my experience here.