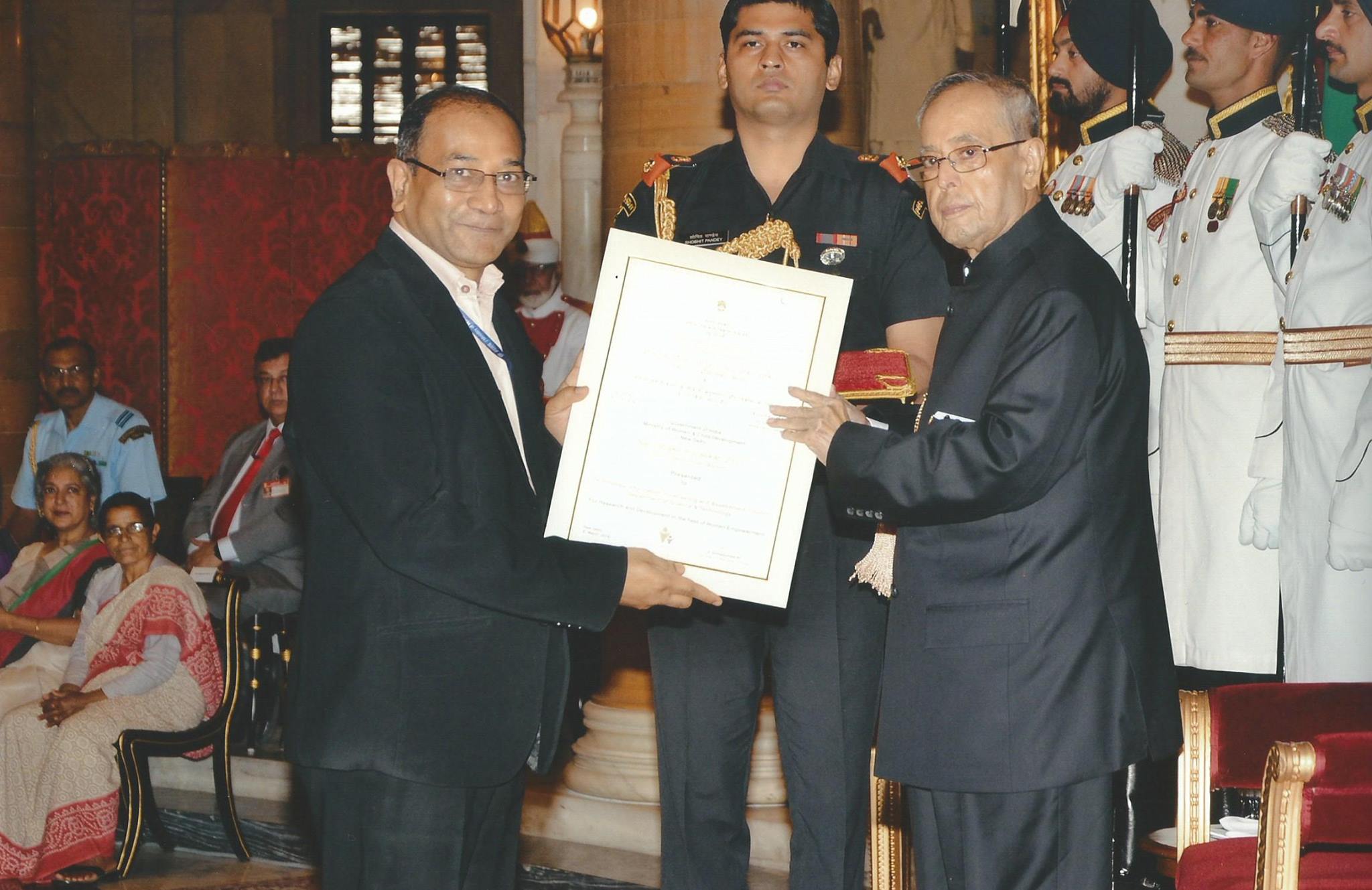 WOS-C (KIRAN-IPR) is handled by TIFAC (Technology Information, Forecasting and Assessment Council), an autonomous body of DST. I was heading TIFAC from April 2013 to April 2018 as its Executive Director. TIFAC had setup a Patent Facilitating Centre(PFC) to facilitate patents and related activities. PFC group handles this program. Trainees selected under KIRAN-IPR scheme are given monthly fellowship and trained in the field of Intellectual Property Rights (IPR) and its management for one year. Training consists of two parts : (1) An intense one month training in Delhi (2) 11 months training in field by placing them in various organizations with activity in IPR. This is coordinated through 3 centres in the country in addition to TIFAC in Delhi. These are in Pune (URDIP) , Chennai and Kharagpur.

After joining TIFAC in on April 25, 2013, I had an opportunity to visit Pune for some official purpose(In fact this was my first ever visit to Pune). I took this opportunity to visit URDIP in Pune and to interact with 7th batch of KIRAN-IPR trainees undergoing internship. Possibly there were 7-8 trainees placed in that centre. After interacting with them, I realized that most of them were women who had just graduated from college and were in the age group of early 20s. I wondered how these trainees had a career break, when they had not even had a career being mostly fresh out of college.

After coming to Delhi I enquired about how we select these women and how do we identify, if they had a career break. I was told that due to less candidates, criteria to detect women with “mid career break” was not enforced. I felt that this was not appropriate since the scheme is supposed to help a specific group of women but does not seem to serve its purpose. We discussed this issue in the committee setup to finalize the plan for next batch (i.e. 8th batch). Committee after deliberations decided to put a minimum age criteria of 27 years. However ,concern was expressed that we may not get sufficient candidates.

We went into details of the reaching out to potential candidates and how we select them. I was told that we put advertisement in the newspapers  as per Govt norms and invite applications through an online portal. Written tests are conducted in four cities, where we have coordinating centres (namely Delhi, Pune, Chennai and Kharagpur). After written tests, interviews are conducted for short listed candidates and final round of selection is done based on the performance. Candidates are reimbursed for travel to exam centres

I felt that newspaper was not the best way to reach out to potential candidates in today’s age when use of print media has reduced. Thus I emphasized the use of Social Media and alumni network. I also mentioned that four centres for written test was too less as it would not be appropriate to expect women to travel long distances for the written test. Thus I suggested that we conduct an online test and at least have one centre in each state. This was agreed upon and we selected an agency to carry out the written tests across country. Our use of social media and alumni network brought record number of applicants. Eventually, we conducted written test at 41 centres across country. In fact, place like Port Blair had only one candidate but we were still ready to have a centre there since to travel to any place from there would be very long journey.

After candidates were selected, we introduced preannounced waitlists so that we could easily fill any vacant seats. Based on this we got full 120 candidates and started the program (though few dropped out at last minute and we had about 112 trainees – more than ever before!). Considering the social conditions under which most of the women had to come, I also decided to introduce various motivational speakers including my own work to help persons with severe disability. After seeing how women with disability were coping up with their life in spite of major limitations, most trainees forgot their own constraints and decided to face the challenges head on.

I also introduced online learning platform using “Moodle” to make it easy for trainees to get lecture materials along with video of the lecture etc. We found that trainees were very interactive and eager to learn new field of IPR. However they also brought their own issues. Many trainees were in family way and at least 10 of them had babies during training period. We agreed to suitably modify the rules to ensure that they could still complete the training period by extending the periods appropriately.

TIFAC was working to identify technical interventions to improve export of Guar Gum. We prepared a report and released it in Jan 2015. Our finding was that India looses a huge amount of money since we do not do further processing of raw material to add value to it before exporting. (See my blog – http://www.ranjan.in/india-continues-to-loose-enormous-wealth/ ). I found that there were 100s of raw materials including minerals where same story was being repeated. Then I discussed the possibility of all the trainees taking up 1 or 2 raw materials and doing patent analysis and international trade analysis to understand what value additions were being done by different countries and how much wealth was being generated by them based on raw materials produced in India. For this purpose, we had a guest faculty from Indian Institute of Foreign Trade (IIFT) come and train them in trade analysis. 8th batch analyzed about 170 raw materials and created very valuable knowledge for country.

During this time I got an email of an award scheme of Ministry of Women and Child Development on work done to improve the quality of life of women. I suggested that we apply for this award based on our work of KIRAN-IPR. I was shown the draft version of filled application and found that it was dealing more with the process of carrying out the training program. I suggested to completely revamp the application by focusing on the impact of the scheme. Through this scheme 10% of all working professionals in the area of IPR in India has been created. At the beginning of program, there were hardly any women in this sector as well very few from S&T background  This scheme made major impact in this sector. Large percentage of trainees have been very successful in their new found expertise and it changed their lives for better. Luckily TIFAC was selected for the award – Nari Shakti Puraskar under Rani Lakshmibai Award category and I received the award on behalf of TIFAC from President of India on March 8, 2016. I was told by ministry officials that they had made an exception by awarding this to a Govt supported scheme due to its impact!

I would urge KIRAN-IPR trainees to share their own stories about how this program has helped them to improve their quality of life!

Sir, It’s really amazing and commendable work done by you and your team. Keep doing good things for society.

Sir can we have online mode of training…..Can the Delhi training be taken in pune

I am not associated with TIFAC any more. You can ask them such questions.

Dear Sir, I really appreciate your efforts and sad to know that you are no more associated with TIFAC. I am a 40 years old mother with a job gap of 7 years. When I came across this advertisement this KIRAN IPR WOS program, it gave me hope and I was really looking forward to it. But with the declaration of final result 2019, my dream has been shattered, my hope is gone. People less than 28 years(where eligibility criteria is 28 to 45) has been selected but not me. I am greatly disappointed, upset, there isn’t even a grievance cell who can hear to this. What should I do Sir, should I just accept it now I am old and just not good enough to restart my career even if I have a very good score of 80% throughout my academics till my PG MCA ? I understand you are not accountable to answer to my question. Just wanted to let you this program is not doing anything that it was intended for.

I am sorry to hear that you missed the chance this time. However I remember few trainees who were selected were of 45 years age. So never consider that you are old! Try next time and in the mean time also go through online material related to IP and may be directly appear for Patent Agent Exam. Best wishes.

Thank you for your response Sir, but I am sorry to mention that I am afraid there are lots of discrimination with this process with respect to few factors that I don’t wish to mention in detail here. I sincerely apologize that being a non localite I do not wish to appear for this program in future which doesn’t adher to its own imposed eligibility criterias. Besides that, best wishes to every woman who got selected.